Flicking through Trademe, I saw a laptop with no reserve that seemed to be the model up from my deceased laptop, thinking i could probably combine the two to get a working laptop, I though a $5 bid on it.


It arrived a few days later neatly packaged, opened it up, and there was the first problem, it used an Intel chip whereas my deceased lappie uses AMD, Oh well  excepting the motherboard all the other bits should be compatible.

So i plug it in using my laptop adapter and it posts to the Compaq screen, which is to be expected given there is no hard drive.

Next up I try a Live Linux distro I have lying around on CD, put that in and in a few minutes I am in a linux desktop.

So, so far it works, however a live linux distro on CD is ok for the basics but you can't update things, save settings etc which is a bit of a nusiance everytime you reboot so I decided to try a distro on a USB thumbdrive, I chose Puppy Linux as it small and not too taxing on older machines. Only problem is older laptops/PCs don't support booting from a USB port.

Once again Linux to the rescue, I downloaded PLOP Bootmanager and burnt it to CD, popped the PLOP cd in my CD drive and rebooted the computer. when the computer rebooted, the CD started the PLOP bootmanager with this pretty wee screen 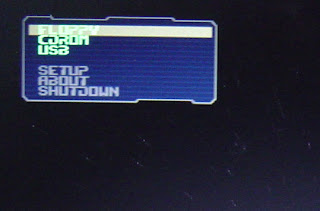 (yes i have cropped the image the actual screen is lovely and crisp looking not at all blurry :) )
Now i have the option to boot from USB, so here we go.

And thats all there was to it $14.50 plus a USB stick and a few parts I had lying around and i have a working laptop.

But wait theres more.
After a bit of use the laptop sounds like a jet trying to take off, so i dismantled it and gave it a clean out, got a bit of dust out etc, reassembeld and still lots of noise, which is odd as my dead laptop was lovely and quiet, went and had a check online, take a wild guess what was listed as one of the Cons of this particular laptop, Noise, as it using a desktop CPU rather than a laptop CPU so the fan is having to really work to keep it lovely and cool.